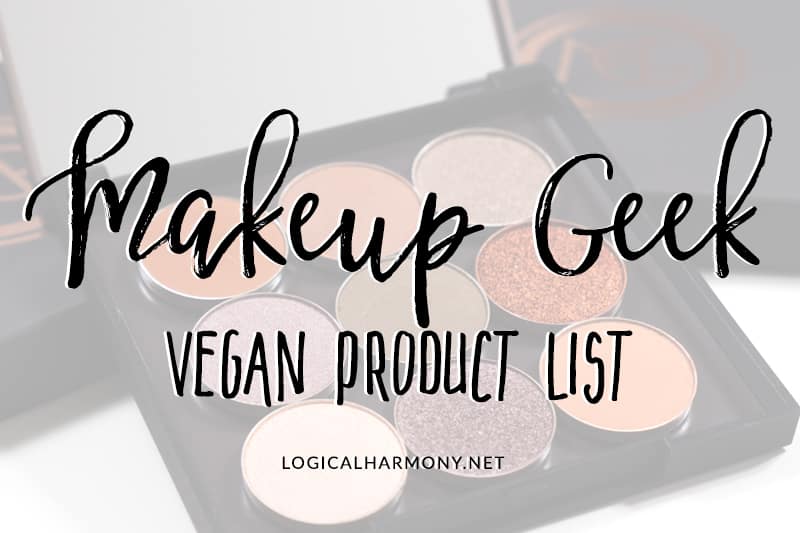 Looking for a list of Makeup Geek vegan products? Logical Harmony has you covered!

Makeup Geek has long been a cruelty-free favorite in the beauty community. Their eyeshadows are some of the best out there and come in a wide variety of shades and finishes. There are a surprising amount of Makeup Geek vegan products – eyeshadows, blush, bronzers, highlighters, and even lipsticks. It’s always great when a cruelty-free brand also has a lot of vegan options. While they are primarily available on their own website, you can even now find Makeup Geek in Target.

Because so many Makeup Geek vegan options are available, this list of the Makeup Geek vegan products is broken down by product type.  That way you can easily see what shades of different formulas are not only cruelty-free, but also vegan friendly. This should make your cruelty-free shopping a little easier.

For any Makeup Geek purchases, you can use affiliate code LOGICALHARMONY for 10% off your order.

Are all Makeup Geek products vegan? No.

Makeup Geek is not a fully vegan brand, but they do have a lot of vegan-friendly options to pick from.

Below are all of the Makeup Geek vegan product options. It is split up by category to make your cruelty-free shopping easier.

If you are new to Makeup Geek, an important thing to know about their ingredient list is that they use the same “May Contain” listing for all shades – vegan or not. The May Contain list does contain carmine, however, this does not mean that there is carmine in all of their products. On some Makeup Geek product pages vegan options are noted, but they are not on all shades or on all product pages.

The following Makeup Geek Velvet Powder Blushes are vegan. The blushes used to come in either a compact or a round pan. With the rebranding, they are now available in only a square pan. This means less packaging waste. It’s also very easy to create your own custom face palette using empty magnetic palettes.

The new blushes in Covet and Sweetness are not vegan-friendly. Covet was vegan before the rebranding, so if you own this in a round pan that version is vegan-friendly. The reformulated version in the square pan is not.

The following Makeup Geek Bronzers are vegan. The bronzers use to be sold in compacts, but now only pans are available. This is great because it means less packaging and it’s a lot easier to create custom face palettes of your own.

In addition to bronzers, Makeup Geek made contour powders for a while. The shades Bad Habit, Break Up, Complicated, Deal Breaker, Half Hearted, Infidelity, Love Triangle, and Scandal were vegan-friendly.

Unfortunately, none of the Makeup Geek Brow Duos are vegan. These duos contain a brow pencil and a brow liner.

The following Makeup Geek Eyeliners are vegan-friendly shades. These are their new retractable eyeliner pencils.

The new liners in Navy and Purple are not vegan-friendly.

The following Makeup Geek Foiled Eyeshadows are vegan. These cruelty-free foiled shadows are a really unique formula that is very pigmented and shimmery. The formula is a powder that’s super buttery and creamy in texture. They are very easy to apply and blend. Grandstand and In The Spotlight and my personal favorites of the shades.

The Makeup Geek Foiled Eyeshadows in Center Stage and High Wire are not vegan-friendly. These shades do not currently appear on the new foiled shadows product page, but on the old one they are marked as “coming soon”.

They used to also make Duochrome Shadows. These are no longer available, but the shades I’m Peachless, Rockstar, Steampunk, Typhoon, and Voltage were all vegan-friendly.

The following Makeup Geek Signature Eyeshadows are vegan-friendly shades. Some additional shades were vegan-friendly before the 2020 rebranding. If you have older round pans, you can check the list at the bottom of this list check on those shades. A couple of shades that used to be part of the signature eyeshadow group have now been re-branded as power pigments.

Creme Brulee and Peach Smoothie were vegan before the rebranding, so if you own this in a round pan that version is vegan-friendly. The reformulated version in the square pan is not. Cocoa Bear was vegan and has now been renamed to Cheetah Bear, which is not vegan-friendly.

The following Makeup Geek Glitters are vegan. These glitters used to be called Sparklers.

The following Makeup Geek Highlighters are vegan. Just like the blushes and bronzers, highlighters used to come in a pan or a compact. They are now just available in pans.

The new highlighters in Ablaze, Glitz, and Firework are not vegan-friendly.

The following Makeup Geek Loose Pigments are vegan. They come in pots of loose powder and offer rich and intense color.

The following Makeup Geek Powder Pigments are vegan. Some of these used to be sold as signature eyeshadows, but they are now marketed as pigments.

The new power pigments in Courageous, Dedicated, Indestructible, Invincible, Potential, Unleashed, and Untouchable are not vegan-friendly.

What about older Makeup Geek products? Did any formulas change during the rebranding of Makeup Geek?

Over the years, Makeup Geek has launched some shades and collections that did not stay on permanently. Some of these collections had vegan options. In the 2020 Makeup Geek re-brand, some shades that used to be vegan changed formulas and are no longer vegan. A lot of shades were discontinued. If you have the old round pans, those are vegan. But the new square pans of these shades are not vegan-friendly. If you’re curious about any of these older products and reformulated shades, that information above in the appropriate sections.

Editor’s Note: By using the affiliate links in this post you are supporting Logical Harmony! How does it work? When you purchase a product through one of these links Logical Harmony gets a small commission at no extra cost to you. This is a very large part of what keeps Logical Harmony running – Thank you!