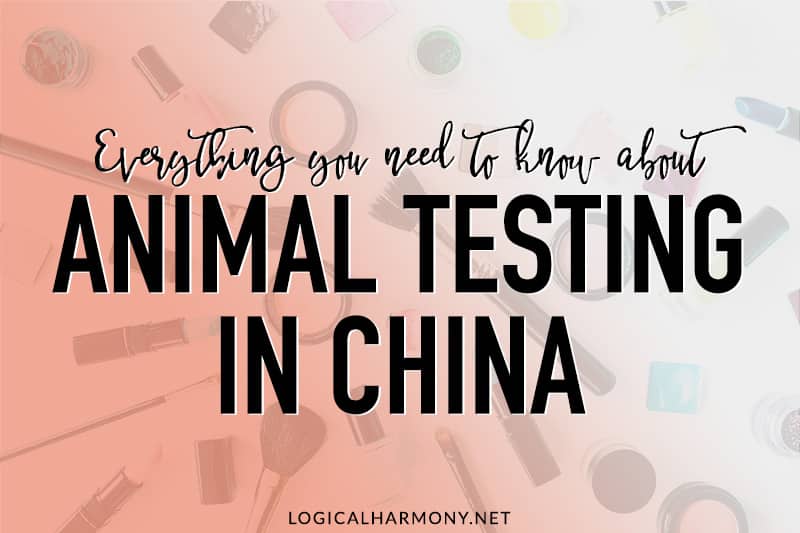 When it comes to animal testing and China, there’s a lot of information out there. There is also a lot of incorrect information as well. The amount that there is to consume is quite overwhelming and intimidating. Often things are worded in a way where you’re not quite sure exactly what to believe. Especially when it comes to reading statements from brands about if they sell in China, where animal testing is currently required by law.

One main goal of Logical Harmony has always been about education. It’s important to know what you buy and what you are supporting. By educating yourself about animal testing and China, you are taking an important step in becoming a better educated and more empowered consumer. In this post, I explain my understanding of animal testing on products and how it relates to China. Please note that this is based on my research of animal rights organizations (such as Humane Society International), cruelty free awareness organizations (such as Leaping Bunny, Vegan Action, and Cruelty Free International), as well as public documentation about the laws in China.

A common belief is that any cosmetic item that is manufactured and sold in China is tested on animals. However, this simply is not the case. This is a great summary of the process, but it doesn’t cover all the details.

Companies who do sell in China often try to make animal testing requirements in China sound less restrictive than they really are. In many cases, these brands even continue to state that they are cruelty free. The reason for this is because the animal testing is conducted by a 3rd party and not the brand itself. The brand still pays for the tests and is aware that they are occuring, but since they are to comply with local and regional laws they try to make it sound as if it is not an optional thing. Many brands do not sell in China and have built up a very large customer base without having to test on animals.

The reason that many companies seem to be moving their products and manufacturing to China is simply to tap into a new market. They can manufacture their products for cheap (or are maybe already doing so) and sell to a new consumer market. I received a few really informative articles from Phyrra about the economy in China that may effect the future stance of companies. China’s Economy Likely To Bottom Out This Quarter,  Advisor Says from Bloomberg, China Cuts Lending Rate Amid Economic Downturn from NPR, China’s Economy Cools, Perhaps More Than Planned from NPR and Three Frightening Phrases You Should Understand from NPR are the articles that she sent my way. These articles all indicate that companies who have changed their stance on animal testing in order to tap into the market in China may not get the profits that they were hoping for. We can only hope!

According to PETA, steps are being taken in China that could change the future. I suggest that you read China to Approve Non-Animal Cosmetics Tests to learn more.

Many vegan and cruelty free blogs have chosen to no longer endorse any products that are manufactured or sold in China. I give these bloggers kudos for doing so! It seems that you can track which companies may be changing their policy on animal testing by their public stance towards China. I completely respect the decision of these bloggers and think that it’s great that they are standing behind their personal beliefs so much.

I also want to say again that if anyone has any additional information I would love to hear it! The more educated we can make ourselves as consumers the better. We control where our money goes and it’s important to not forget the power that money has to these cosmetic companies. As many companies who have changed their animal testing stance to sell in China have shown, the possibility for revenue will often overshadow the publicized moral stance of a company when it comes down to it. Take the power and let these companies know where you stand.