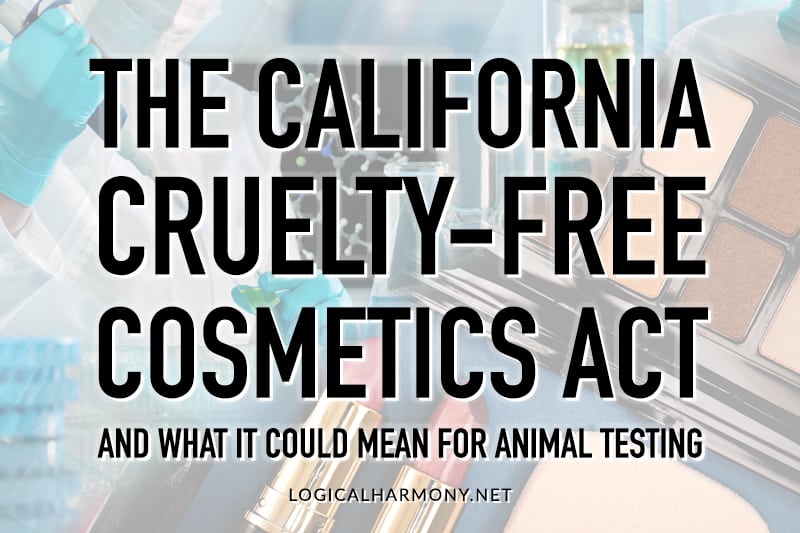 There’s been a lot of celebration about the California Cruelty-Free Cosmetics Act this week. It’s made a lot of positive strides and has passed through the state senate, but there is still a bit more to be done before it will become a sure thing. I’m seeing a lot of questions from people about what the California Cruelty-Free Cosmetics Act would mean for animal testing on cosmetics, for brands, and for consumers should it be enacted as a law.

A lot of awareness is being raised for the cruelty-free movement right now, but there’s still a lot to be done with the California Cruelty-Free Cosmetics Act (SB-1249) and with other acts as well, such as the Humane Cosmetics Act. Right now is a great time to understand where things currently are so that you can continue to spread awareness and we can keep moving forward.

In this post, I break it all down for you so that you can have a better understanding of what the California Cruelty-Free Cosmetics Act means and how it may change things. I also answer some of the common questions I have been seeing asked on social media.

Has the California Cruelty-Free Cosmetics Act passed? Will it be a law?

Update on October 1, 2018: The Governor has signed the act! This means that it will now move forward and go into effect as law in 2020!

While the California Cruelty-Free Cosmetics Act has passed through the state Senate, it is not a sure thing. In order to be a law, the Governor needs to sign it for it to go into effect. He has until the end of September to sign the documents. This means that we need to keep pushing in order to get this Act through so that it becomes a law.

Notwithstanding any other law, it is unlawful for a manufacturer to import for profit, sell, or offer for sale in this state, any cosmetic, if the cosmetic was developed or manufactured using an animal test that was conducted or contracted by the manufacturer, or any supplier of the manufacturer, on or after January 1, 2020.

In 2002, California became the first state to prohibit animal testing on cosmetics and personal care items on animals, when there is an alternative testing method available. This new Act would be a great addition to the current law.

If the Governor does sign, when would the California Cruelty-Free Cosmetics Act go into effect?

If it does get signed, it goes into effect on January 1, 2020. This gives brands that could be impacted time to make changes and adjust their practices and policies as needed. Any animal testing that occurs on ingredients or finished goods before 2020 is allowed and the brands will not be punished for any animal testing done before this cut-off date.

Does this mean that all cosmetics sold in California will be cruelty-free?

No. If made a law, the California Cruelty-Free Cosmetics Act does not mean all brands sold in California will have to be cruelty-free.

More details on this pulled from the bill are included below.

It won’t change the animal testing practices of many major brands. Many of these test per government regulations in the US or other countries and will still be able to do so.

Did the original bill ban animal testing as required by law?

It allowed for animal testing to occur if: Required by the federal Food and Drug Administration or the Department of Toxic Substances Control, and there is no alternative method available, to comply with a formal requirement of a foreign regulatory authority, or for noncosmetic purposes in response to a formal requirement of a federal, state, or foreign regulatory authority for a noncosmetic use.

Will brands that currently test on animals as required by law, such as L’Oreal, be forced to become cruelty-free?

No. Brands that currently test on animals as required by law will not be forced to become cruelty-free in order to sell in California.

Hopefully, some will use this as a moment to make changes to their current practices, but brands that test as required by law will still be able to do so. This is a good time to let those brands know that being cruelty-free matters to you.

Will brands that currently test on animals as required by law, such as MAC, be forced to close their cosmetics counters?

No. Counters and stores in California for brands that test on animals as required by law will not close. They will be able to operate as they currently do.

As a consumer, can you walk into a store like Sephora and only see cruelty-free brands?

No. Because brands can still test on animals and be in accordance with the Act, you will still need to research the brands that you find in stores to ensure that you are buying cruelty-free brands.

All that said, it’s huge because it’s raising so much awareness for the cruelty-free movement!

This is always worth celebrating. Right now so many outlets that rarely talk about the importance of cruelty-free are discussing it. This is a great opportunity to help more people become aware of cruelty-free brands and the actions that they can take to support not only these brands but also the Acts that could help make animal testing a thing of the past.

What can you do to help push the California Cruelty-Free Cosmetics Act through the final process?

Support the bill by contacting the California Governor Jerry Brown. Let him know that you would like to see the California Cruelty-Free Cosmetics Act become a law. You can email him from an online form found here. That page also includes a mailing address and phone numbers as well.

What other ways can you help the cruelty-free movement in the United States?

PCRM does a lot to eliminate animal testing and to work on alternatives, and they were involved in this Act as well.

Lush Prize also awards funding to projects that would end animal testing and is a great way to find out about the groups working on these efforts.

Support the Humane Cosmetics Act, which would end cosmetics animal testing in the US.

You can learn more about the Humane Cosmetics Act here, but it would be a nationwide change to animal testing for cosmetics. I’ll be sharing more details soon about what it impacts and how you can help move it forward.

Let your Representatives know that you would like them to support this Act by filling out this online form from Humane Society International.

Let your favorite brands know that being cruelty-free matters to you.

Thank brands that are cruelty-free for choosing to be so. If a brand isn’t cruelty-free, let them know that you would love it if they made the change. This can be done easily through an email, tweet, or an direct message on Instagram.

Read more about the California Cruelty-Free Cosmetics Act, including the full text of the Act, online. I strongly encourage everyone to understand it a bit better and take action. You can even see the changes that have been made to the text of the Act.

For those who want to understand more about what the act does not cover, you can read the following text from the act itself. I am including this because there seems to be a lot of confusion about what is and is not covered, but the act is very straightforward and direct.

The prohibitions in subdivision (a) do not apply to the following:

(1) An animal test of any cosmetic that is required by a federal or state regulatory authority if all of the following apply:
(A) The ingredient is in wide use and cannot be replaced by another ingredient capable of performing a similar function.
(B) A specific human health problem is substantiated and the need to conduct animal tests is justified and is supported by a detailed research protocol proposed as the basis for the evaluation.
(C) There is not a nonanimal alternative method accepted for the relevant endpoint by the relevant federal or state regulatory authority.

(2) An animal test that was conducted to comply with a requirement of a foreign regulatory authority, if no evidence derived from the test was relied upon to substantiate the safety of the cosmetic sold in California by the manufacturer.

(3) An animal test that was conducted on any product or ingredient subject to the requirements of Chapter V of the Federal Food, Drug, and Cosmetic Act (21 U.S.C. 351 et seq.).

(4) An animal test that was conducted for noncosmetic purposes in response to a requirement of a federal, state, or foreign regulatory authority, if no evidence derived from the test was relied upon to substantiate the safety of the cosmetic sold in California by the manufacturer. A manufacturer is not prohibited from reviewing, assessing, or retaining evidence from an animal test conducted pursuant to this paragraph.